Blink Charging Hellas, a Greek entity that Blink Charging Co. (NASDAQ: BLNK) owns together with Eunice Energy Group (EEG) and others, announced its first deployment of Blink electric vehicle charging stations in Greece, as part of the green energy electrification of the Rio-Antirrio “Charilaos Trikoupis” Bridge. The electrification of the bridge is an initiative of WE ENERGY, a member of Eunice Energy Group that is dedicated to the development and widespread use of renewable energy.

Blink installed two dual port charging stations on the bridge last week, unveiling the technology at a special ceremony which was open to the public. Each of the four ports have 22 kW charging capabilities. The ceremony was in honor of the bridge’s 15th anniversary and marked the bridge’s transition to a renewable energy supply. Blink and Eunice Energy representatives were in attendance and had the opportunity to educate the many visitors about Blink’s charging stations, the need for further EV infrastructure, and the advantages of using renewable energy. The four charging ports, powered by WE ENERGY, use electricity generated from renewable sources.

“The deployment of these two dual-port charging stations supports the green energy initiatives led by WE ENERGY and assists Greece with the development of its EV infrastructure. Although Greece is still in early stages of development of EV infrastructure, recent efforts by Greek energy suppliers, such as Eunice, are bringing the development of electric vehicle infrastructure to the top of Greek’s to-do list,” says Michael D. Farkas, Blink’s Founder and CEO. “We couldn’t be more excited to be taking an active part in this cultural shift towards widespread adoption of electric vehicles in Greece.”

In the coming months, Blink intends to deploy additional EV charging stations, both level 2 and DC fast chargers, across Greece, furthering its commitment to help the citizens of Greece, and others around the world, in creating a cleaner, greener transportation system. Blink is focused on making range anxiety a “thing of the past” worldwide.
Since its inception in 2009, Blink has been paving the way for the adoption of electric vehicles. Blink has become one of the leading providers of EV charging stations and the largest owner/operator of charging stations in the United States. This deployment is another step in Blink’s mission to slow the effects of climate change by reducing greenhouse gas emissions caused by transportation, globally.

Blink Charging Hellas is a partially owned subsidiary of Blink Charging Co. (U.S.), a leading owner/operator of EV charging stations in the United States with a growing presence in Europe, Asia, Israel, and South America. With a long history as a pioneer in the EV industry and a dedicated team with immense knowledge of the industry, Blink continues to be the preferred, trusted partner in EV Charging Station technology. As such, the company is a driving force with more than 150,000 registered EV driver members and more than 15,000 EV Charging Stations deployed.

WE (WE ENERGY) is the title of EUNICE TRADING S.A., member of EUNICE ENERGY GROUP (EEG). WE Energy provides homes and businesses with electricity produced exclusively from renewable energy sources. Its vision is to provide consistent access to the cutting edge global energy developments while creating TOGETHER (WE) a world of sustainable development and energy autonomy for everyone. 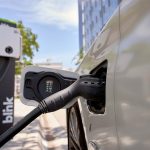